This is the thirty-seventh in a series of posts on the Vietnam War. See here for the previous post in the series and here to go back to the master post.

The French named the stretch of Highway 1 from Huế to Quảng Trị “The Street without Joy.” Austrian-born American academic (and a former French resistance fighter) Bernard Fall popularized the term in 1961 by publishing a book with that same name. The name comes from the difficult terrain along the coastal highway that allowed the Viet Minh to neutralize the mechanized forces of the French in the Indochina War.

Bernard favored U.S. support of the South Vietnamese anti-communist efforts but, as the war escalated from 1964 and onward, he warned that the Americans were making the same mistakes as the French did and suffered from a failure to appreciate the nature of the conflict in which they were engaged. Fall was killed by a landmine in February, 1967 while accompany the U.S. Marines on an operation along the Street without Joy.

As the calendar pages turn, little is happening. The only brigade-level action in mid-May 1966 is a Marine search-and-destroy op in Quang Ngai.

I return to my ongoing game in Vietnam Combat Operations and focus on the U.S. Marines as the spring turns to summer in 1966. The significance of the date is perhaps appreciated only by me as it is when I chose to split my Cold War timeline into two. Otherwise, at least in this game’s version of events, the date is particularly unremarkable. In the South, the U.S. Army has been unable to make contact with any major insurgent units in weeks. In the North, the Marines are having slightly better luck. On the date in question, a joint U.S./South Vietnam Marine operation in a remote section of Quang Ngai has managed to isolate an unknown communist unit. With an entire theater’s worth of air support available to me, I will make an example out of whomever this is. 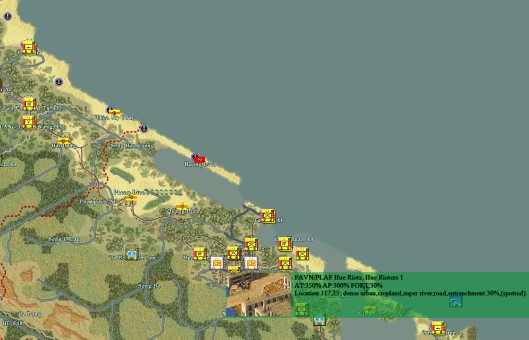 The Street. Looks quite in mid-May time frame, but in Hue, there are anti-government riots.

In the far north of South Vietnam, along the DMZ, it has been pretty quiet, through all of the first three scenarios. This, too, is an illustration of Vietnam Combat Operations‘ unique design. In nearly any wargame with active enemy contact like this, a programmed opponent is going to want to send its forces across the DMZ to saturate the area around the cities of Quảng Trị and Huế. Depending on the detail of the terrain modelling, this would be reinforced by the difficulties of getting between the two cause by limited river crossings, mountains, and other factors (and Vietnam Combat Operations models this well). Lightly garrisoning this area or otherwise not paying attention would lead to getting overwhelmed by forces based in North Vietnam.

Operation Florida searches for the 6th PAVN between the O Lau and Ho rivers.

By contrast, this scenario allows you to focus exactly on the historical scenarios. Deploying a brigade-sized force to hunt down a suspected Regiment. It is all too easy for the game to descend into an Eastern Front-style hex-and-counter clone. The very thing has happened in one of the other TOAW Vietnam scenarios. Here I can operate confidently despite “knowing” that there is a numerically-superior force near by without constantly preparing to defend against ahistorical attacks.

What appears to be a disconnect, I’m going to say, is an artifact of the simulation taking place at a level above the real “action.” Although, in defense of the typical game AI, even Westmoreland was surprised that the North hadn’t already made a play for Huế. However, much of what was actually happening on the ground was at finer detail than that modeled by even the lowest-level TOAW treatment. Small units of communists would infiltrate villages, only to scatter when U.S.- aligned forces appeared. Forcing a player to “control” (in the TOAW sense) each hex to account for the “hearts and minds” aspect of the war would both be unrealistic as well as a micromanagement hell. The more I play this scenario, the more I appreciate the work that went into getting it right.

Another interesting point in the above screenshots is the representation of the riots in Huế City with combat units. It is, of course, a trap, if you haven’t read the accompanying manual. It would be easy enough to send in the U.S. Marines to wipe out the rioters. That would also cost you a bunch of victory points while gaining you nothing. As far as I can tell, those rioters don’t cause the U.S. any harm. It makes it a little harder to move around Huế and probably impacts supply tracing as well. Given the paucity of operations further northward, there is little effect on the game – unless you’re stupid enough to slaughter them with tanks.

Operation Jay, per my game. As my Marines are hunting for the enemy formations to the north, they come from the south, hitting me in the rear.

The final turn of Vietnam Combat Operations, Volume III, has a freshly-initiated “Jay,” the U.S. Marine Corp search-and-destroy operation along the same stretch of coastline which had plagued the French. This was the only operation initiated on the next-to-last turn of the scenario and therefore is the only real action on the final turn, as shown in the above screen shot.

This got me thinking about one ramification of breaking the war up into discrete scenarios which end on a date certain. In this case, knowing that no forces on the map were earmarked for an upcoming Op., I was able to direct all the U.S. Marines from Huế City northward, into the zone where I had made contact. This had the result of doubling the number of historical forces involved which, ahistorically, allowed me to isolate not only the attackers, but their regimental headquarters operating nearby. Again, with the full airpower of the Vietnam theater available for support, I was able to eliminate one of the the units before the scenario ended. Had this not been the end of the scenario, I probably would have refrained from committing forces not earmarked for this operation simply to improve my chances of cutting off the enemy’s retreat. The reason why is that I wouldn’t want to lose access to them for an historical operation that was coming up in the next turn or two.

Of course, this is small potatoes in the scheme of things. I probably earned a couple of extra points by eliminating an extra unit in this “gamey” way, but it had no effect on victory or even a noticeable movement in the 1000s of points that are available in the scenario. For what its worth, this was, as with Volumes I and II, another draw. I’m getting better at determining where there are friendly (and idle) forces in proximity to victory point locations, which are also worth contesting. It helped that Volume III released a number of riverine units to my control, which allow an easy way to keep track of enemy movements in the Mekong Delta.

Only one battalion, but near-infinite mobility.

Squad Battles: Vietnam also includes an Operation Jay scenario, titled The Battle at Ap Chinh An. It simulates the opening hours of the operation and initial contact between the U.S. Marines and the North Vietnamese Army. As a Squad Battles scenario, it is an interesting one. As a model of the battle in question, it is considerably less so.

The scenario starts with a battalion of Marines aboard helicopter transport and some victory locations clustered around the village of Chinh An. Once again, however, it is a battalion without mortar companies, nor does the operation have any off-board air or artillery support. The free deployment, however, means is that, as the player, we are able to deploy in almost initial configuration that we want. This is definitely a departure from the Squad Battles scenarios I complained about where the path to victory is hemmed in by movement and game length. 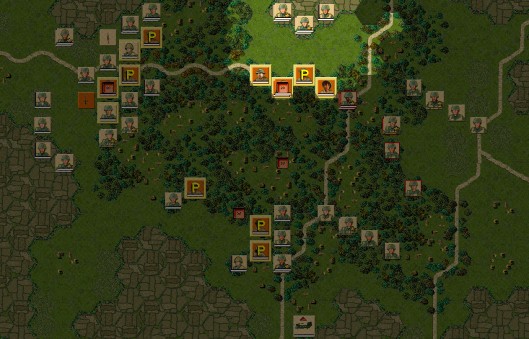 I love it when a plan comes together. This was exactly what I intended.

You might see in the first of my (Squad Battles) screenshots, my plan is to send my three companies out to ring the objective area, allowing an attack coming from all sides. In the immediately-preceding  screenshot, it should be apparent that the plan worked quite well. I was able to land my force with the loss of only a single transport, I found no enemies outside my “ring”, and was able to tighten my noose without any unexpected opposition. The victory was complete and then some. For the first time that I can remember in a Squad Battles game, I wiped every single enemy unit from the board.

Unfortunately, as fun as that might have been, it was neither realistic nor historical. Unrealistic because the idea of having ad-hoc landing sites, subject to adjustment depending on where the enemy is encountered, is something that is difficult to imagine actually occurring within an operation. Landings were planned out ahead, typically only occurring after reconnaissance and then air and artillery preparation. The scenario probably should have, in the description, designated the landing zones (perhaps giving the player a handful of discrete choices) and suggested the player select the landing zone, or zones, before the scenario begins and stick to their decision. While a player is free to restrict himself in such away on his own, it would be difficult to do without guidance. Unless you’ve already played the scenario, it would be hard to know where on the map reasonable landing zones might be.

Secondly, the visibility of the victory locations and my knowledge about how Squad Battles scenarios are typically set up meant that I considered the entire map, outside of the area in the above screenshot, to be a safe zone. In reality, the commanders at the time likely would have made the opposite assumption. Outside of the landing zone, they would have very little confidence about areas were occupied and defended versus what lcoations were free.

On top of non-realistic aspects, this simply isn’t a fair simulation of the historical battle. In reality, the landing of the 2nd Battalion of the 4th Marine Division did take approximately the length of this scenario to complete. However, the landing itself was unopposed and well back from Ap Chinh An itself. A realistic landing zone for this Battalion (LZ Raven) would have been off the left edge of the upper screenshot, but likely still on the Squad Battles map. When the 2/4 Marines encountered resistance as they approached the village, they called in air and artillery support, attempted a flanking maneuver with one of their companies, and positioned a second Marine battalion (2nd of the 1st) off of the screenshots to the right. That second battalion encountered additional resistance at Ap My Phu and was unable to move into a position to support the attack on Ap Chinh An. By the time all this played out, the entire day had passed. The NVA managed to escape the Marine’s trap under cover of night.

As with many scenarios, this one may have meant to both use a realistic portion of the operation’s order-of-battle, but also allow the player to experience (to some extent) the larger battle. It’s a design choice and, as I said, not a bad one as far as the “fun factor” for this scenario goes. It makes it tougher on the player who was hoping to understand something about this battle.

Return to the master post for more Vietnam War articles. The next article deals with Operation Hastings, which followed shortly after Operation Jay.