The Italian War of 1521 to 1526 is also referred to as the Four Years War, although you think that name would have been taken already. If you are keeping track at home, it is the 4th in the series of Renaissance Italian Wars. Although it is in many ways a continuation of the conflicts begun in 1494, this one starts in what is in many ways a new world.

Luther’s theses have already started to shake the foundations of the Christian West. Charles V has united the Kingdoms of Spain, the Duchy of Austria, the Duchy of the Netherlands, and the titles of the Holy Roman Empire under one rule. In the last, he has incurred the ire of Francis I, who very much wants to the Emperor himself. That’s on top of decades of political maneuvering in Italy. The influence of the Ottoman Empire is also beginning to encroach on the affairs of Italy, particularly as their capture of Belgrade foretold invasions from the Turks soon to come.

Pike and Shot has scenarios for two of the largest battles in this Italian War; The Battles of Bicocca (1522) and Pavia (1525). Both of the battles were French defeats with the latter resulting in the capture and imprisonment of Francis, thus leading to France seeking terms to ransom the king and end the war.

They are both scenarios with unique conditions, and both are played as the (presumably) underdog French. In the first battle, you take command as the Swiss Pike formations begin rushing headlong at the Imperial fortified defenses. In the actual battle, the Swiss mercenaries attacked first (rather on their own initiative – they refused to wait for coordination with the French artillery) and largely broke their formations against the enemy’s defenses. With the core of the French army in disarray, there was little left for Imperial army to do but wait for the French to flee the field.

At the outset, the notes suggest to the player that he (I) ought to make the best use possible of his (my) French forces to aid in the Swiss attack that is occurring with or without him (me). I have no control over the Swiss – they are a computer controlled ally. This strategy makes the battle winnable. Obviously so as I, in fact, won. I attribute much of my victory to the fact that the Germans counter-attacked, moving forward from the protection of their defenses and exposing themselves to my counter-counter-attack. Whether this could be considered “Bad AI” (playing the Imperials, I would have tried to stay behind my walls) or simply a realistic result of what happens once units engage, I won’t try to say. It is already very much a speculative battle.

The scenario also employs what I think was a bit of scripting to implement one historical aspect of the battle (and hopefully this isn’t a spoiler for anyone). As the Swiss approach the Imperial line, the arquebusiers hold the front position behind a wall and German pike backs them up. At some point they swapped positions (without actually maneuvering). This duplicates the actual battle where the Swiss ranks were first shredded by musket fire and then attacked with fresh pike formations. It is a nifty way to implement the scenario but again shows the weakness in expecting a game engine to be able to generically represent a period’s battles.

In the several years following, the French suffered a series of disappointments. Although at several junctures they had superiority of force, they were never able bring that to bear by cornering and defeating the opposing army.

In late fall, 1524, Francis personally lead an army across the Alps and began re-seizing territory lost at the outset of the conflict.  Eventually, Francis laid siege to a much smaller force defending the city of Pavia. Through a series of factors, both strategic and diplomatic, the Imperial forces achieved a local superiority in numbers and began a pre-dawn attack and sally to break the French army.

The French army was bivouacked inside a walled park north of the city. Units actually involved in the siege were close in to the city and the remaining force was scattered within the protections of these walls. The battle began as Imperial engineers worked overnight, under cover of an artillery bombardment, to create a breach in the park walls which would allow their armies to enter the park and align against the French for a dawn assault.

Once again, the Pike and Shot scenario is designed to highlight some unique features of this battle. The map, as we will see in more detail later, recreates the fight in a linear fashion. The French forces are sandwiched between the defenders in Pavia’s fortifications and the relieving force to the North, which we are told have penetrated the wall. The notes suggest the player, as French commander, must make a decision about how to split his forces to defeat the attack from the North while protecting against the city’s defenders in the South.

The initial clash with the enemy occurs in some very bad ground. The minimap shows the bulk of the Imperial army hanging back. I assumed this was an AI mistake until they moved forward and crushed me.

The scenario was harder than the previous in the campaign, so much so I’m not even sure what my mistake was. I over-withdrew from the siege lines and was, at game end, overwhelmed by attacks out from the city. At the same time, my forces in the north were insufficient to defeat the attackers. I pressed on with some hope of winning some localized battles, but I don’t think I even got close.

Of course, a similar fate awaited Francis on that day. Upon warning that a Imperial attack was in progress, Francis lead a counter attack. Having underestimated the size of the opposing force, the initial French attacking force were quickly separated from the remainder of the army and were rendered even less effective by the broken terrain. In the end, Francis himself was captured and the French army suffered huge losses. The besieging force was driven off and also suffered significant loss. The focus of the war moved from capture of territory to the ransom of Francis, ultimately drawing the Ottomans into the fight.

The Imperial army starts the day forming outside of the breach in the park wall. Note, especially, the nice pike and shot formation at the top-center (where it says Spanish arquebusiers). The AI is not going to be able to keep that together.

To compare, I played a user-made (created by the same user as many of previous games) scenario for Field of Glory. My immediate impression (which I tried to capture with the above screenshot) was of a more realistic battlefield layout. Unlike the previous battle, there seems to be an emphasis in accurately recreating the terrain (as far as historical documentation and the medium allow). Comparing it to a painting of the battlefield (shown below), you can see that the Field of Glory map captures many more of the key features in a visually-accurate way.

[Image from Wikipedia]Difficult from the limited scope of the above screenshot, but comparing the FoG map with a near-contemporary painting of the battle shows that this is a more accurate representation of the field.

Another major difference, relative to Pike and Shot, is that Field of Glory does not represent the combined pike and shot formations that were coming to define the imperial armies of this time. Instead, the larger units must be constructed with pike formations in proximity to units of arquebusiers.  Indeed, the latter seems to be the industry norm as the HPS/Tiller functions the same way. I’ve had positive experiences with Field of Glory and well-made medieval battles, but I don’t think that extends into the pike and shot era. While there is something interesting about seeing the unit makeup of a colunella in the Field of Glory deployments, the engine and, more particularly, the AI don’t quite seem up to it.

As a head-to-head scenario this one might be quite a different experience, but as a player versus computer the initial good qualities are quickly overwhelmed by problems. As alluded to above, the AI doesn’t have any appreciation for the combined pike and shot formations that were so critical to the imperial army, and immediately begins separating them. Worse, it doesn’t quite understand the wall with a breach in it, and begins running its troops back and forth outside the eastern wall. The decision, in the Pike and Shot scenario, to start the game with the imperials already deployed inside the wall (and, indeed, to forgo the wall entirely) is validated in this scenario.

As I played it, the worst damage the AI dealt to me came from their cannon within the Pavia defenses – they would have been better off not attacking in the first place. Even more than my previous play, the Field of Glory scenario demonstrates how much of the battle gets tied up in the ugly terrain near the breach in the wall.  Given the confused AI, though, the wall itself protected me from the superior numbers available to the Imperial forces. I was able to slowly defeat enough units in detail to obtain a victory.

I’ve early played some attempts to remake the stock scenarios for Pike and Shot, and I’ve been disappointed. I was a little nervous about loading up a user-made Battle of Pavia scenario, but on viewing it I quickly changed my attitude. 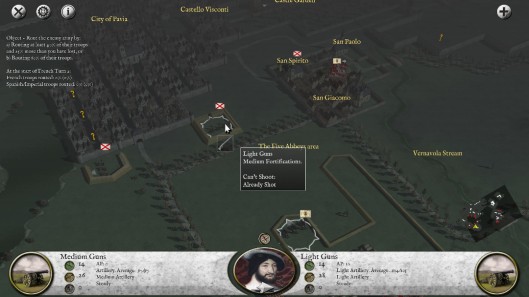 Atmosphere. From the dark and foggy beginning to the accurate depiction of the battlefield, this is a fine looking scenario. This screenshot shows the siege lines around the City of Pavia itself.

The scenario starts out, like the stock Pike and Shot version, just as Francis becomes aware that an Imperial army is inside of the park walls. The fog of war is modified to recreate the dark and foggy conditions that initially covered the battlefield. As the French player, I really have no idea where the enemy is and in what numbers and so my initial moves involve sending light cavalry around the map trying to figure out the situation. Without the linear simplification, the battlefield devolves into scattered, localized fighting. The chaos adds to the feel and the AI doesn’t get too baffled by the more complex situation. I have not tried to look at what scripting enhancements the scenario builder had to employ to get it all to work, but I would guess there is something.

As the battle begins its march towards the inevitable conclusion (I, France, lost again), I noticed how the key fights and locations of the battle played out very similarly both Pike and Shot versions. That is, the simplification of the battlefield in the stock scenario still preserved much of the battle’s action. This latter version was even more difficult, in terms of trying to win against the AI, than the original. Once again, I was overwhelmed in all places and had little sense of a “mistake” that I made to get things going all wrong.

As a historical exposition, I like this third scenario better. As a game-play “puzzle,” for the player to figure out how to reverse the historical course of the battle, the stock scenario might be a little better in its simplifications. And the Field of Glory scenario? That tells me that Field of Glory, originally focused on the Roman Republic, takes it an era too far to try to model pike and shot.

Both the Battles of Bicocca and Pavia, as well as some of the fighting not included in these engines (e.g. The Battle of the Sesia) were all part of the seismic shift in the technology of warfare. The Italian War of 1521-1526 was not only a victory of  Charles’ alliance over the French, but yet another victory for the gunpowder-armed infantry over the formations of pike.