I noted earlier that the CDC had spoken favorably of the modeling used in Plague, Inc. for epidemiology. Shortly after I wrote that, the world learned of a new and fearsome virus. Labeled 2019-nCoV or the Wuhan Corona Virus, infections numbered in the 10s of thousands and deaths in the hundreds within a month or two of virus identification. The spread of the virus, first beyond the city of Wuhan and then beyond China’s national borders, is causing alarm around the planet. As of January 30th, the World Health Organization has declared a “global emergency” citing the “unprecedented outbreak” that the virus represents.

By late January, Plague, Inc. had become the top download in China. This even spurred an announcement from the game’s developers to remind us all that Plague, Inc. is just a game, not a scientific simulation.

Like the Chinese and gamers all around the world, a few headlines made me want to play some more Plague, Inc myself. I managed to unlock the “virus” ability and was quickly able to set about killing every last human on the face of the earth with my new Corona & Lime Virus, a strain particularly prone to mutations. That, in turn, got me thinking about one of the big gaps between game and reality and, resultingly, the reason why global plagues are so rare and, at least so far, have yet to wipe out our entire species. 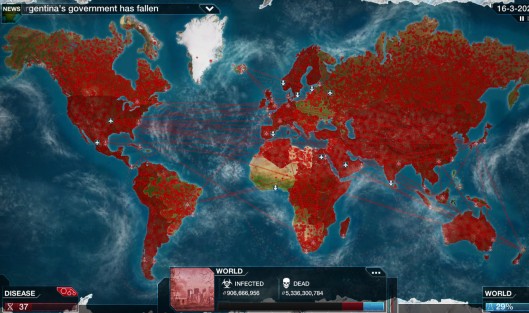 My Plague, Inc. strategy of choice (at this time) is try to spread my disease completely across the globe while maintaining relatively innocuous symptoms. Then, as the research towards a cure starts to progress, I try to rapidly evolve my virus into something deadly. Having used a virus, and given the options I’ve “unlocked” so far, I can and enjoy maximizing free mutations. That helps make sure I leave enough DNA points to execute a proper end game. These “freebees” come at a cost – a self-evolving virus can tip off the authorities too early and grant them a chance to effectively quarantine a country or two, which is usually enough to prevent a victory. It is also possible for a virus to cause a disease so deadly that it kills its victims faster than they can pass the virus on to the healthy population.

That right there is one of the problems with real-world diseases and the true risk of a pandemic. Something like Ebola, as truly awful as it is to an infected population, just isn’t dangerous as a world wide threat. Ebola is so deadly that the risk of becoming widespread is quite low.

Understatement of the century.

So what about a virus, in nature, that  uses my strategy? Can some new variation infect the world and then mutate into something deadly? Fortunately, disease doesn’t really work that way. When a virus (or a bacteria, parasite, fugus, etc.) mutates, it is a single organism that experiences the mutation, not the archetype for the illness. So if we look at the screenshot above, where my virus has infected the vast majority of the world’s population – what would happen if it mutated into a particularly deadly strain? Well, one person would die. If he died without passing on his particular variation of the virus (which he now hosts along with other, non-deadly organisms), then that mutation would never be seen again. If he does pass it along, then he becomes the new patient zero for a new disease (albeit a variant of a previous one) that must, person-by-person, reinfect the entire world.

If that doesn’t tilt the odds enough against me, there is more. Note that most of the world is already infected with a non-mutated version of the disease. That now-ubiquitous virus is very, very similar to the newly-created, deadly strain. In most cases, that infected population will now enjoy a resistance, if not an outright immunity, to my latest mutation. The success I had in spreading, under the radar, a milder version of the disease will actually work against me when I now try to turn my outbreak deadly. In reality, an evolving virus (like the flu or like this year’s corona virus*), must keep making run after run at the population. 100 years ago, nature demonstrated the potential of just the right combination of infectiousness and virulence to cause mass mortality. Yet it is a feat that that has not been repeated in the century since.

It is possible to conceive of a fast-acting, deadly epidemic that threatens the entire world population a la The Andromeda Strain. However, like that story, one would almost be compelled to imagine it as an organism that is only incidentally a “disease.” Crichton’s super-bug did not evolve to kill humans. That was merely an accidental and, from the organism’s own perspective, irrelevant happenstance. All this makes for a good story, and a good game, but not a particularly good simulation.

I pondered a little bit about what it might look at to model realistic mutations. The best I could come up with it would definitely wreck the concept of the game as it is played today. I’m not sure its even feasible to to implement this concept (player is the plague) within the parameters of realistic science on mutation. This is of course OK. For all talk about CDC valuing the game’s educational aspects regarding transmission and impacts of symptoms, nobody should ever mistake games for simulations.

While we’re on the topic, Plague, Inc also seems to have missed the ball on Brexit. As Brexit came and went, the running gags Brexit still pervade the game. Along with relevant pandemic updates news-of-the-weird, the headlines about how the UK population that voted for Brexit without understanding what they’d done continue apace. I suppose the narrative that the yahoos of England “didn’t mean it, really” when they decided they wanted out of the EU will persist among the “elite” for years to come. The insistence that the blue collar types would all take it back if they could – well that just didn’t work out. No matter how many times and ways it came up, England stuck to their (no longer legal?) guns – they meant what they said when they said they wanted out. Now they’re out. I, for one, think its going to turn out OK for them.

*Let’s nod our heads towards the conspiracy theory that says that the Wuhan virus was genetically engineered. That may be a little out there, but if the severity of the impact of this disease continues to grow, there is going to be a strong tendency to blame the government (either mismanagement, misinformation, or outright malfeasance) for what has gone wrong.

The front page of the Wall St. Journal yesterday morning has the headline “Ebola Is Now a Disease We Can Treat.” It is a spark of good news in the a treatment of a disease that has a lethality as high as 90% for some strains. It also meshed well with a game that I’ve been playing over the last few days.

India sounds like an ideal place to launch a plague.

It was years ago when I loaded the free version of Plague, Inc. app on my tablet. I had read some very positive things about it and, well, it was free. Why not give it a try? Unfortunately for me, in order to run, the game required some kind of Google Play network support, which I did not have installed. I have a pretty old tablet and a) I didn’t want to install a new background program that was going to make it run even slower than it already does and b) I’m not sure Google-whatever would be compatible with my ancient operating system.

Again?! You’d think they’d have learned their lesson in 2019.

Periodically, I thought about trying to make it work but never quite managed to motivate myself. I even picked up the PC version (Steam) in a package deal, but still just didn’t have the right combination of interest and stellar alignment to get it running.

Finally on the radar in India, where they are calling my disease the “Oozing Gak.” Not, however, before I’ve spread to the U.K. and the U.S.

A week or two ago, however, I noticed that there the company who created Plague Inc.: Evolved (the name of the extended, PC version) has a new game in development called Rebel Inc: Escalation. They’re taking the same gaming engine that works so well for epidemiological modeling and using it to take on the challenges of counter-insurgency operations. It seems like a wonderful idea. It seems like an idea I could have, nay should have, come up with myself. The new game is in early access now, and I’ll probably look to get it sooner rather than later, but meanwhile…

I don’t get the feeling that the Ndemic programming team is pro-Brexit.

I was diddling around on my tablet and once again launched the Plague app, perhaps with my mind on the above. As usual it failed due to the lack of the networking software. However, this time, after telling me it wasn’t going to work, the game actually launched and allowed me to run the tutorial. The free version is missing some of the features, but it was enough to motivate me to install it on the PC and try it again there. 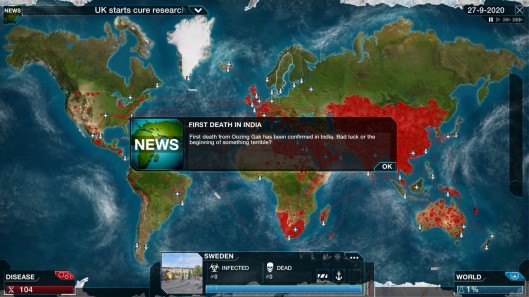 By the time India has attributed my first death, I’m already well established around the world.

Plague Inc.: Evolved a fun, light game. I think it took me in the neighborhood of 20-30 minutes to finish a session. The variety isn’t huge, although there are many different settings which ramp up the difficulty if you want to keep it challenging. There is also a range of locked content to keep you playing, should that float your boat. Otherwise, it is a fairly simply game that, one you get the hang of it, there isn’t going to have that much more too it.

I fear making the same mistake as before. Greenland is disease free and I need to find a way to spread my Gak there.

Essentially, you’ve got to spread your disease, inhibit research, and then kill all the people. These three goals have to be kept in balance. Spread too alarmingly or manifest yourself as too deadly, and the world’s countermeasures will ramp up and stop you. In my first game, I got too lethal too fast and ended up wiping out most of the earth but leaving several countries (Cuba and New Zealand, as I recall) disease free with no way to transmit the disease there. Despite all the options for replay, I think this would only last your typical gamer so long. This is not Crusader Kings. Roleplaying as a bacterium doesn’t have quite the emotional engagement as manipulating politics to put your son onto the throne of France.

In the end I could only kill about 2 billion before a cure was discovered. Shouldn’t I at least get a marginal victory, having stopped Brexit?

It’s deep enough, though, to be enjoyable and realistic enough to have captured the attention of the CDC. The interface is pleasant, intuitive, and runs smoothly and without issues. It’s also only $15 full-price and even less if you pick it up in a sale (it’s 60% off as I type this). So maybe it isn’t novel or deep, but it is a well made little game that I shouldn’t have waited so long to try out.