The term Orwellian gets tossed around quite a bit. As I recollect, it has always been thus. I’ve also always found it to be a bit hyperbolic. Could the Soviet Union, even at its worst, have been as bad as Orwell’s 1984? Does North Korea truly match that today? Does it really make sense to apply Orwell’s template to England or to America because we see some similarities?

Even the worst tyrannical regime on the earth today has subtleties and variations that make it difficult to view them in absolute black and white. This is part of what makes literature, in general, and George Orwell’s dystopian writings, in particular, so important. This distinction became came clear to me this past weekend. Perhaps you saw what I saw. The editorial staff of the magazine Nature penned a mea culpa for engaging in malquoted oldthink. The lead paragraph explained Nature‘s unfortunate situation,

When the World Health Organization (WHO) announced in February that the disease caused by the new coronavirus would be called COVID‑19, the name was quickly adopted by organizations involved in communicating public-health information. As well as naming the illness, the WHO was implicitly sending a reminder to those who had erroneously been associating the virus with Wuhan and with China in their news coverage— including Nature. That we did so was an error on our part, for which we take responsibility and apologize.

If we look at that paragraph without context, is it so bad? Not at first glance. The editorial goes on to explain that in oldspeak it was common practice “for viral diseases to be associated with the landscapes, places or regions where the first outbreaks occurred.” They give a couple of examples that many adults would be familiar with. “Middle East respiratory syndrome,” for example. The “Zika Virus” was named after a forest in Uganda. Self-referencing a bit, “Ebola” is the name of a river near the village where one of the first identified outbreaks occurred in 1976. The river was specifically chosen to destigmatize the name of the village where the disease occurred and to avoid the name of the individual, the village school’s headmaster, who first contracted and subsequently died of the disease. Nature explains that in 2015, the WHO issued guidelines whereby newly-identified* diseases must no longer use, among other things, geographical identifiers in their official names.

So far, there is some logic to this – but we can’t look at it in a vacuum.

As the above-quoted editorial suggested, some “news coverage” had been “associating the virus with Wuhan and China.” Not surprising, because the initial human-to-human transmission occurred in China (definitely) and almost certainly in Wuhan. Newsworthy? One would think. However, we are told, doing so was “erroneous.” Further down we come to understand that Nature is very much concerned about the politics. “As countries struggle”, we learn, “a minority of politicians are sticking with the outdated script.” Oh, the horror. And who are these doubleplusungood politicos who would shit all over the suffering of the most miserable nations of the world? So that nobody is unclear, a trio of ungood politicians is named.

US President Donald Trump has repeatedly associated the virus with China. Brazilian lawmaker Eduardo Bolsonaro — the son of President Jair Bolsonaro — has called it “China’s fault”. Politicians elsewhere, including in the United Kingdom, are also saying that China bears responsibility.

Now we have named our enemy and we can take up the sword of righteousness.

If you read the “conservative” press, you’ll find a particular angle from which they raise their objections. You see, part of what’s wrong with this implicit defense of China from politics is that China, themselves, are also politicizing the pandemic. The unpersons whom we have not named in Britain are correct – China does actually bear some responsibility here. Perhaps some responsibility in the original transfer (see footnote), maybe, but definitely some responsibility in the suppression of information and outright misinformation as the virus began to spread within and then beyond China. In other words, they see in this apology active support for the Chinese propaganda campaign that is currently in progress. However, this is an argument that isn’t going to resonate too far outside of the pro-Trump crowed.

To the authors, yes it is about Trump, but just not in that way. In not following the WHO guidelines to the letter and beyond, they inadvertently gave aid and comfort to the great orange devil. This is the sin for which they were required to prostrate themselves on the alter of public opinion. It’s unlikely that simple malquoting would require such a penance.

But back to my original point. Let’s forget the politics and stick with the literature. When Orwell created his dark future, it was one that was unequivocally bad. Nobody, but nobody, could “yes but” over the loss of freedom of conscience and the suppression of human nature. Furthermore, his book quickly became a standard within modern, liberal democracies. Each of us among the enlightened citizenry had read about and, presumably, could identify his indicators of totalitarianism and the ensuing destruction of humanity.

OK, maybe not each of us. We can’t expect everyone in America, or England, to have read and understood every canonical novel**, not to mention their implications. However, for the editors of a major magazine, one would expect them to be particularly literate, particularly well-read. Is it really possible that someone whose living is earned by writing could say “I’m sorry that I ever erroneously associated this virus with Wuhan and China when I wrote that it originated – uh somewhere, I forget where” without remembering their reading of Orwell? 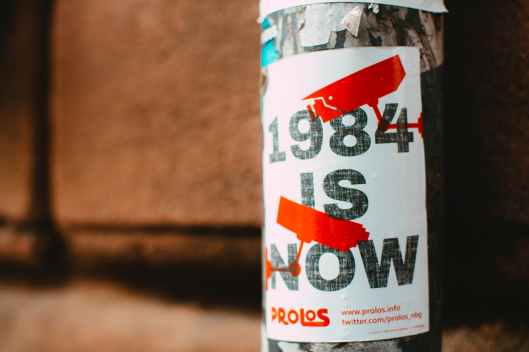 Photo by Markus Spiske on Pexels.com

I’m sorry we ever said we were allied with Eastasia. Oceania had always been at war with Eastasia, and stating otherwise was wrong. That we did so was an error on our part, for which we take responsibility and apologize.

*Interestingly, they also warn against unduly frighting language when indicating that a disease is, in fact, new. “Unknown” would be forbidden where as the more-academic sounding “novel”, one supposes, is quite alright.