My efforts to squeeze early cold-war conflicts into the CMANO framework continues.

This is the nineteenth in a series of posts on the Vietnam War. See here for the previous post in the series and here to go back to the master post.

The user-concocted scenario Here, There, and Everywhere models a U.S. retaliation against North Korea after having lost a plane to a communist SAM launch. The F-4 was shot down on July 24th, 1965 while escorting a bombing raid on Hanoi. In all, four aircraft were hit, but the plane piloted by Captains Roscoe Henry Fobair and Richard Paul Keirn was the only loss. Fobair was killed and Keirn was a prisoner of war for nearly eight years.

Three days later, Operation Spring High was launched in retaliation, targeting the SAM locations. The raids involved over 100 aircraft, of which six were lost. Later, it was discovered of the two SAM launch sites that were bombed, one was a decoy and the other was empty. The operation and the losses taken during were for naught.

The scenario deviates from this unfortunate chapter in the Vietnam war in several ways. First, it is scaled down. With 40 planes total flying in the raid, it is less than half the size of the actual raid. Furthermore, the target selection is a little different. The actual mission targeted two of the newest SAM sites identified in North Vietnam. It was believed that these were the launchers directly responsible for the loss 3 days earlier. In addition to bombing the launchers themselves, the attack was to target the barracks of the missile crews for each target. 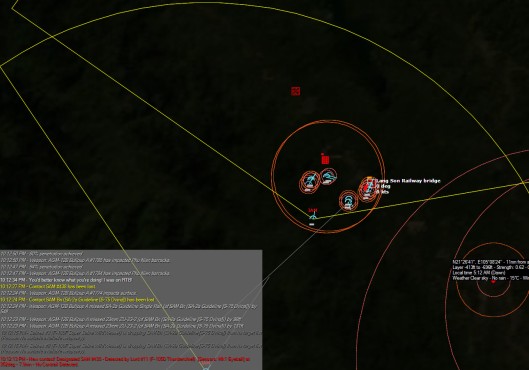 At the break of dawn, by jets roar into North Korea. I’ve managed to knock out a SAM site and am well on my way to taking out the railway bridge.

In our modified reality, the target is the barracks for one missile launch site only and then two bridges nearby. The SAM itself is not identified as a main target, but the user is told that any “extra” SAM destroyed on the mission is a bonus.

It’s not clear what the scenario designer intended regarding the decoys and the misdirected mission. There are active SAM sites in the mission, near the primary targets. Perhaps the fact that the barracks only, not the nearly SAM, is the target is supposed to recognize that there were no actual missiles co-located with the barracks. Or perhaps the designer placed a live SAM site into the scenario because that is what the mission planners believe would be there. Would anyone, in hindsight, fly a mission to bomb a bunch of telephone poles? Would the scenario give points for doing so?

During my play of the scenario, I did strike two of the active SAM systems near the primary targets and then bomb all three of the victory location targets. Already I’m way up on my historical counterparts, but mostly as a result of hindsight.

For a recreation of the historic July 27th mission, think I would have to give this a D-. There are t0o many details incorrect, some of them likely deliberate and some simply unresearched. As simply a representative mission of what was going on in the summer of 1965, I’ll give it a B+. 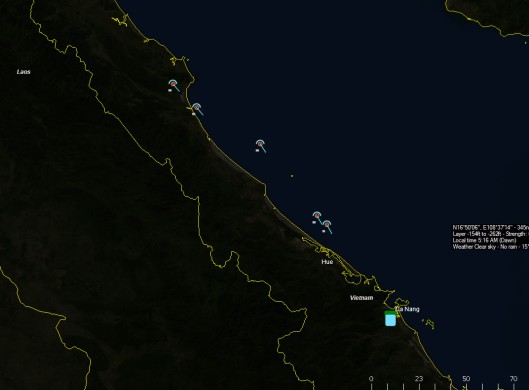 Having successfully delivered their payloads, my people head home to Da Nang.

The scoring for this scenario seems a little buggy. I lost three aircraft in my attack. While that is one better* than the historical result, the scenario description warns of severe penalties for loss of aircraft. I would have thought even two would have been a loss. If you’re going to play this one, I think you need to be prepared to receive mighty praise at the end, even if you’ve done a rather shabby job.

I’ve complained before about scenarios that are unwinnable until you know some of the tricks. As a matter of fact, I had to play through this scenario twice. Technically, my previously stated conditions for a problem scenario were not actually present. Furthermore, with the scoring as it is, I was on track for a total victory despite having a real mess on my hands when I quit and restarted. My problems in the first run-through had to do with bad planning and no concept of the mission parameters. It took a play through the scenario to figure out what I didn’t know (but probably should have).

What I didn’t realize was the all the bombers (although not the support planes such as spotters and jammers) required midair refueling just to make it into their targets. As such, my first attempt at a dawn raid had the bulk of my planes turning back toward Thailand, still fully laden with bombs, just as the sun was coming up. I also struggled a lot with the way the planes will return to base (directly to base) once they complete their mission. This means it is very difficult to get them to exfiltrate along the prepared attack coridor. Instead, unless you are prepared for it an advance, they split their attack flight up into single aircraft, and all head straight for Da Nang, directly over additional, still active SAM locations.

I had to restart to try to get my timing right and get myself prepared to micromanage each aircraft once the bombs were delivered.

Interestingly, this fumbling was mirrored within the actual mission, but for entirely different reasons. Haphazard planning and last-minute mission reconfiguration resulted in unplanned delays from the originally-planned dawn strike.

So while historicity isn’t a strong suit of this scenario, many scenarios aren’t meant to be. As an indication of intent, I notice that the date in the scenario precedes the actual event by 20 days. This may be a signal that the scenario was meant to be a fictional mission, inspired by true events and not a recreation of the mission. In any case the scenario was entertaining as well as a nice introduction to the transition to modern weapon systems that was talking place starting in the mid-1960s.

Return to the master post for Vietnam War articles or go on to the next article, another discussion of Operation Starlite in an operational-level game.

*There were a total of six aircraft lost in this operation. Four were lost to North Vietnamese defense fire over the target area. Two more were lost due to a mid-air crash during the return trip. CMANO is not going to simulate a mid-air crash for no apparent reason. In IL-2, on the other hand, I see that all the time.