This is a series of posts on the Suez Crisis. See here for the first regular post in the series, here for the previous post, and here to go back to the master index.

Returning, finally, to where I meant to begin this whole exercise, the actual Israeli attack on the Sinai which turned the Suez Crisis into the 1956 Arab-Israeli War.

I’ll start, once again, with the Operational Art of War scenario covering the event.

The first thing that hits me with this scenario is that map size. It is huge. Comparing to the size of the 1948 Independence War scenario, the  hex scale is twice as fine, and the maneuver units are the next level down. Instead of 1 day turns, the turn length is six hours. This is an order of magnitude or more over an Arab-Israeli Wars (the board game) scenario, and sets up the game to last roughly as long as the actual, 9 day, war.

Several deviations from reality are made to improve the game play. As the design notes for the scenario indicate, in the actual attack, the Egyptians had orders to fall back to the Suez Canal. Likely this would tend to trivialize a game at this scale. Instead, for this scenario, the Egyptians are set to “garrison mode.” They will hold their ground, but they will attempt coordinated counter-attacks. This simulates the damaged command and control without having them simply withdraw.

The next deviation is that, at least in my play-through, the British and French demurred shortly after I began my attack. This is mentioned in the design notes as a possibility and I have not looked into the triggers for this event to see how likely it is and what it depends on. This also ramps up the difficulty, as, after some initial air attacks, the Israelis are on their own. The Israeli plans for the operation recognized this as a possibility and still foresaw victory, even under these conditions.

In this case, the scale of the scenario helps to convey the sense of fighting in the desert. There are vast spaces with not-much-of-anything between towns, between units. There aren’t really fronts, as much as units racing through the desert and meeting each other. The less-than-one-day turns do bother me somewhat, because the game doesn’t account for day/night combat or the required down time. I suppose one should consider the turns to be not 6 hours, but each day divided into four fighting segments. 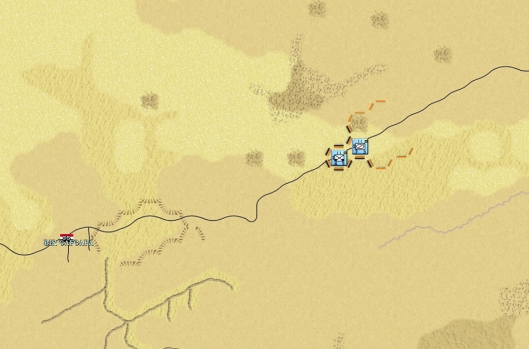 Situation near Bir Gifgafa on November 4th. I’m several days behind schedule for the battle there, and short a tank battalion. All of my 7th Armor Shermans – ALL OF THEM – got stuck in the sand back near Abu Ageila, and will sit out the remainder of this war.

As you can read in my above caption, I am a tad frustrated with some of the hex movement. This isn’t the first game where it has happened, but it is happening repeatedly here. I am getting units stuck in hex locations; they can move into the hex (maybe advancing after an attack?), but cannot move out again. The result is a perfectly functional unit removed from the battle, with no particular warning or recourse. I also took a big hit in victory points for straying too close to the “no go” line, where the British and French ostensibly could play a neutral role in “protecting” Egypt. In the end, this dropped me a victory level and resulted in some very unsatisfying end game text. Note, I didn’t cross the line. Frankly, if there is going to be proverbial “line in the sand,” one shouldn’t be penalized for going up to it without going over.

Mechanics of the game aside, I’m not sure this is the right scale for this war (or war for this scale). The fight (ahistorical French/British action aside) was probably never in doubt at the military level. The grand strategy, the politics (as I’ve said before) are the real story here, but as for the fighting, the interesting battles were at particular engagements where the odds temporarily favored the Egyptians before Israel reinforced. While there is some value in seeing this play out at the theatre level, I think it was the individual fights that would hold the gamer’s interest for this war.

Return to the master post or go on to the next article.

5 thoughts on “From the Top”