I played through the next Confederate scenario in Scourge of War: Gettysburg. This one supposes that Stonewall Jackson has survived his wounds at Chancellorsville and is available to command the whole of Second Corps in the afternoon of July 1st at Gettysburg.

The presence of Stonewall Jackson, per se, is not significant to the game play. However, it allows interesting way to introduce the important what-if.  What if the South could have coordinated her attacks on the first day of Gettysburg? What if the field would have been under a unified, and competent commander and the Corp weren’t divided between Ewell and A.P. Hill? Did Ewell fail to to take Cemetery Hill as a result of military reasons, or simply because he did not have what it took to lead?

As I had hinted before, I tried to play the game more in the way it appears to be intended. Although I did not actually engage the settings which restricts the camera view to the leader’s location, I tried to play as Jackson. Most of my commands were sent by courier, with the exception of instructions for adjacent units, where I used the direct interface.

The more I play the game this way, the more obvious it is that this is the right way to play this game. It introduces command delay and even the uncertainty that couriers will even get through with their message. It also introduces the real factor of friendly fog-of-war.  A commander doesn’t know what even his own side is doing, except through messages or actually riding forward. For an element the size of a Corp, there is no way he can be cognizant of what all of his men are doing, at least not in detail. 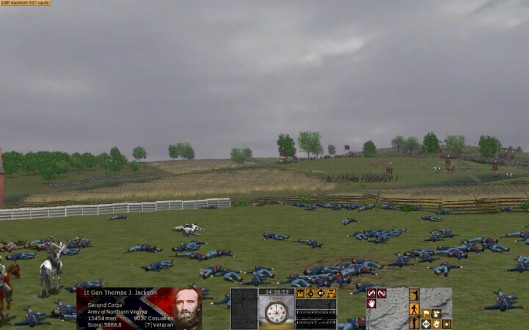 From just east of Gettysburg, Gen. Jackson observes his Corp swarming onto Cemetery Hill. Early has neglected to bring his artillery forward for support, and Jackson would like to see some placed here on this field.

The above screenshot was taken just before game-end, which was at 3PM. Because I did not take Cemetery Hill, I did not get the victory. Perhaps this answers the question as to whether the game “plays itself” when restricting one’s play to the commander. I think the answer is that, without direct intervention, the scenario will not be won within the time-frame allowed.

One little tidbit I miss. In the original Take Command, Jackson was represented with one arm in the air and holding a lemon. That detail is absent in this iteration. Perhaps had he survived Chancellorsville, he would have toned down his eccentricities. Or perhaps the wounds at Chancellorsville would have precluded riding around with such a pose.

Personally, I’m still taking this as a victory for the Old South. While Cemetery Hill isn’t taken yet, there is still plenty of daylight left to secure the heights and put Lee’s army into an ideal defensive position for when the remainder of Meade’s forces come up over the next two days.

Return the master post or go on to the next article.